The forthcoming novel by Galahad Porter 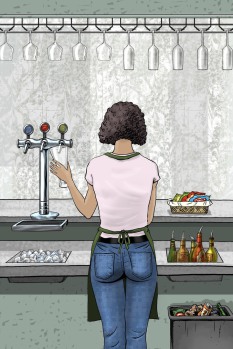 Meet Lucy at the bar!

Young and newly pregnant, Lucy the bar worker is desperately seeking the father of her unborn child. She has lots of options for her future. She really would like to at least discuss with him what happens next. Set at a bar in the USA, it unfolds over five working days. Should she keep searching for him, or move on with her life?

Lucy's dilemma was planned to be the opening scene of the thriller trilogy. It seemed unfair to gloss over her decision making process, and get on with the next chapter in the trilogy. Unable to resist exploring the life of another trilogy character in more detail, the quirky hotel receptionist Sally, what started as a short story eventually emerged as the debut novel At Reception. That has delayed publication of the trilogy. Once again, another character has emerged with a story to tell that should be heard. The bar has several customers who appear in the trilogy, and these early scenes set out the background for the first book in the series. Writing Lucy's story creates the opportunity to explain in more detail why certain characters behave the way they do. A prequel is planned to be published after the trilogy. That is intended to answer some of the underlying questions readers may still have on finishing the series. Nevertheless, telling Lucy's story enables readers to step into the world of the trilogy just days before it starts. Hopefully that will not just entertain, but arouse interest in the series!

The fictional bar is called Bar 2BC for more see bar2bc.com.

The as yet untitled novel featuring Lucy is planned for publication in 2021.

You can keep up to date wiith the progress of the novel by following:

Note: All the places and characters created by Galahad Porter are fictional and not based on any living, dead or fictional person or character or real place. Any similarities to such are purely coincidental. Image © Dave Hill 2018.